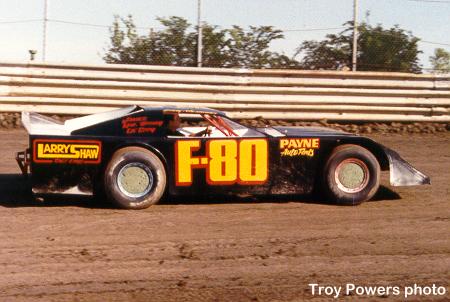 We had the pleasure of chatting with dirt racing legend Eddie Ray Alexander this month. He agreed to be the second LOCAL LEGEND to respond to the questionnaire for Memphis Racing History.

Eddie has been heavily involved in racing for decades, long before ever making a start in a race car.

At age 14, he was given the opportunity to drive one of his father’s cars for the 1962 race season. After just one lap, he fell in love.

He would go on in his career to post hundreds of wins over his 38 seasons as a driver, all across the mid south, though many were won right here in the Memphis area at Lakeland and Riverside.

We have been wanting to sit down with him for a while now and I was truly honored to be able to get a few minutes of this legend.
YOUR NAME:
Eddie Ray Alexander

NAME(NICKNAME) YOU ARE BEST KNOWN:
Dont reckon I’ve ever had one

YEARS INVOLVED IN RACING:
I started racing when I was 14 years old in 1962. 2000 would have been my 38th year driving but a stroke affected my eye sight

YOUR HERO (racing or non racing) :
My dad Hoyt Alexander

GREATEST RACER YOU HAVE EVER MET:
That’s tough because I’ve raced against so many but I would say my dad. He was so smooth and he could win on asphalt at Lakeland on friday and then win on dirt at Riverside Speedway on Saturday with same car and basically same set up

BIGGEST MOMENT IN RACING:
One of my biggest achievements that I’m most proud of is in 87 and 88 I won 37 out of 40 races.

BIGGEST REGRET IN RACING (if any):
Racing takes alot ot time away from your family, especially if you’re racing as hard as we used to. Plus I was building race cars for people while also working a full time job. There were many days I would come home from work and head straight to the shop and by the time I came inside for the night my kids would be in bed

BIGGEST CHANGES YOU HAVE SEEN BOTH POSITIVE AND NEGATIVE:
Safety in racing had come so far since I started racing where we had a seat off an old tractor as a race seat. But the cost of racing is ridiculous

WHERE DO YOU SEE RACING HEADING IN NEXT DECADE:
Dirt track racing has grown so much even since I quit in 2000. I think it’s just gonna get bigger and bigger but we all have to get out and support our local tracks

WHAT CHANGES WOULD YOU LIKE TO SEE IF YOU HAD THE POWER:
I guess I would change the cost of racing but that’s never gonna change

WHAT ADVICE WOULD YOU GIVE TO A NEWCOMER IN RACING:
Enjoy every lap, because one day you’ll race your last one

SOMETHING ABOUT YOURSELF THAT MOST FANS WOULD NOT KNOW:
I had a scholarship offer to play football for Ole Miss, but I turned it down because i couldn’t race as much

WHAT YOU MOST WANT TO BE REMEMBERED FOR (racing or non racing):
In racing I’d like to be remembered as a tough competitor that gave it his all every single lap for 38 year! Non racing I wanna be remembered as a husband, father, and grandfather that loved his family with all his heart

With the area states moving to different phrases of reopening  we suggest you verify dates with tracks before making trips for any events.